The Visible Infrared Imaging Radiometer Suite (VIIRS) is an instrument onboard the Suomi National Polar-Orbiting Partnership (S-NPP) spacecraft, which was launched October 28, 2011.  The VIIRS instrument follows the legacy of, and improves upon, the measurements made by the NOAA AVHRR and the MODIS instruments on Aqua and Terra.  VIIRS observes Earth’s entire surface twice each day, with an equator crossing time of approximately 1:30 a.m. and 1:30 p.m. (local time).  At an orbit of 835 km, VIIRS scans a swath that is approximately 3000 km wide, 710 km wider than MODIS, and wide enough to avoid gaps in coverage near the equator (unlike MODIS).  The VIIRS instrument collects imagery of the land, atmosphere, oceans, and cryosphere across 22 spectral bands, ranging in wavelengths from 0.41 to 12.5 microns, and at two native spatial resolutions: 375m (I-bands) and 750m (M-bands). 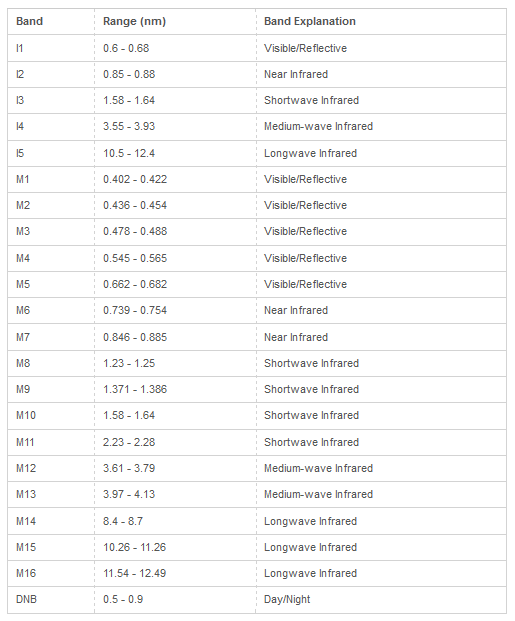