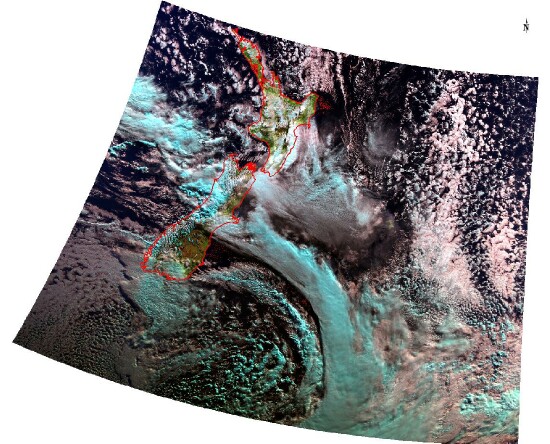 Geology & Geophysics – Ron Smith, Professor in Geology & Geophysics, is a PI on the international research project DEEPWAVE.  This project studies the gravity waves generated in the troposphere and propagating upwards to the mesosphere in the vicinity of the New Zealand Alps.  These mountain waves are thought to influence the climate of the Southern Hemisphere by modifying the large-scale planetary wave pattern and the overturning of the atmosphere between the equator and the pole.  The local influence of these gravity waves can often be seen as they produce the so-called Canterbury Arch Cloud over the South Island of New Zealand.  The photo shows an example of the Arch Cloud on 20 June 2014 as seen by the MODIS instrument on the Terra satellite. In addition to the mid-tropospheric Arch Cloud over the Canterbury Plain, this image shows shallow closed-cell convection over the Pacific and Southern Oceans, and deep convection (blue) over the Tasman Sea and the west coast of the South Island.  Smith’s group in G&G will be analyzing the waves and convection using data from research aircraft, balloon soundings and satellites. 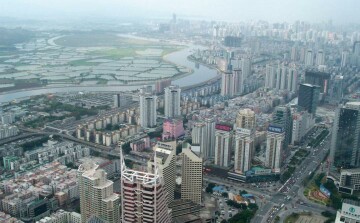 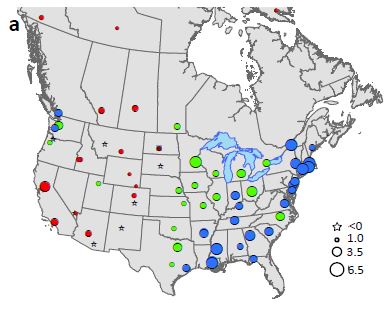 School of Forestry & Environmental Studies – Xuhui Lee examines the interaction of the earth’s surface and the lower atmosphere. His group uses satellite observations to study land use changes (urbanization, deforestation) and their impacts on the surface climate. 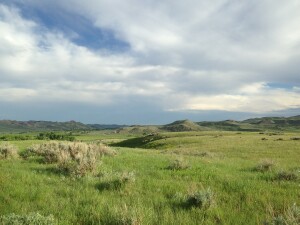 School of Forestry & Environmental Studies – The Ucross High Plains Stewardship Initiative, or UHPSI, is science-based research program focused on land stewardship in the American West. At its core, UHPSI seeks to expand current rangeland management practices to further embrace our ever changing ecological, social, and political landscapes with strength and resiliency. UHPSI was formed through the vision of Wyoming entrepreneur Raymond Plank, who was galvanized by his personal experiences to use his local landscape as a demonstration site for cutting-edge stewardship practices. At the heart of our work is the Ucross Ranch, a 22,000 acre working cattle and sheep ranch in Clearmont, Wyoming. The Ranch serves as a living laboratory where a highly collaborative team of students and alumni from Yale University’s School of Forestry and Environmental Studies focus their efforts. Under the Direction of Pinchot Professor of Forestry and Environmental Studies Chad Oliver, the team works closely with local land managers and stakeholders, including the Ucross Foundation, Apache Foundation, and suite of academic and political interests across the West.

At the heart of our research are remote sensing and geospatial technologies. We have explored, or are currently exploring, a number of research programs that rely on spatial data including: a custom land cover classification relying on high spatial resolution WorldView-2 imagery; the identification and abundance estimation of Euphorbia esula (leafy spurge, an invasive species) using custom tasked hyperspectral imagery captured from the Hyperion sensor aboard NASA’s EO-1 satellite; a multi-resolution hydrological analysis of the Clear Creek watershed surrounding the Ucross Ranch using the Soil and Water Assessment Tool (SWAT); a geographically-focused demographic analysis of farm and ranch operator age classes across Wyoming; a spatially-integrated sampling program capturing data on dissolved greenhouse gasses across an elevational gradient in the Clear Creek watershed; infrastructural mapping for the Ucross Ranch; an evaluation of the effects of horizontal positional error on accuracy statistics derived from error matrices associated with categorical maps; and a suite of smaller projects utilizing time series analysis, travel cost modeling, occupancy modeling, and GIS network analysis, among others. If you would like further information on UHPSI, please visit our website: http://highplainsstewardship.org 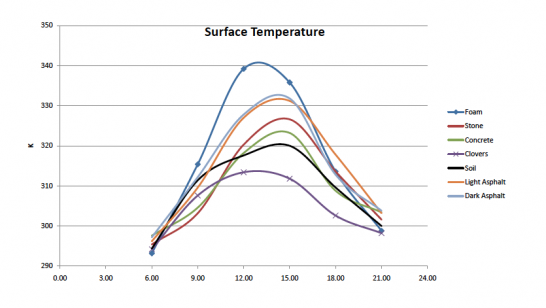 School of Forestry & Environmental Studies and the Dept. of Geology & Geophysics – Xuhui Lee and Ron Smith examine regional aspects of the earth's Surface Heat Budget.  While the evidence of global warming continues to grow, the theory of regional climate change remains less well developed and less well accepted. Because individuals and societies experience only regional and local climates, our lack of knowledge threatens both public awareness of climate change and the design of adaptation strategies. An important science problem with regard to local climate is the role of the earth’s surface. 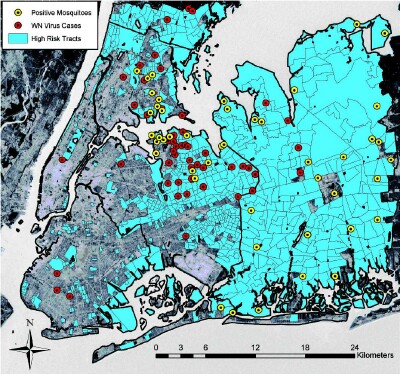 School of Public Health – Durland Fish, Professor of Epidemiology and Microbiology, and Maria Diuk-Wasser, Associate Professor of Public Health, have been developing spatial models of human risk for infectious diseases, such as West Nile virus, Lyme disease, and other diseases transmitted by insect vectors. The accessibility of a wide variety of remotely-sensed data, hardware, and technical assistance provided by CEO has created a unique environment for the development of pioneering work on infectious disease mapping at YSPH. The chance of anyone acquiring a vector-borne disease depends upon a specific set of environmental conditions that favors the presence of both the vector and microbial pathogen. Ticks and mosquitoes are particularly sensitive to temperature and humidity, and are frequently associated with quantifiable landscape features such as vegetation, water, and elevation. Extensive field studies have determined patterns of dependence upon specific environmental factors by both vectors and the pathogens they transmit.

Accomplishments to date have included the development of a National Lyme Disease Risk Map for the CDC, which was the first disease map to be made available as a mobile phone app. RS data was used to identify the probable center of the West Nile virus epidemic in New York City where the virus was first introduced in 1999. RS data on vegetation and hydrology of the Florida Everglades is being used to map the distribution of tropical mosquito-borne viruses and to project their future changes due to wetlands restoration efforts and climate change. Satellite imagery is also being used to identity case houses on the Caribbean island of Dominica where mosquito-borne chikungunya virus became epidemic in 2014. YSPH and CEO have trained many students in "spatial epidemiology" who have gone on to become independent researchers in this growing field. 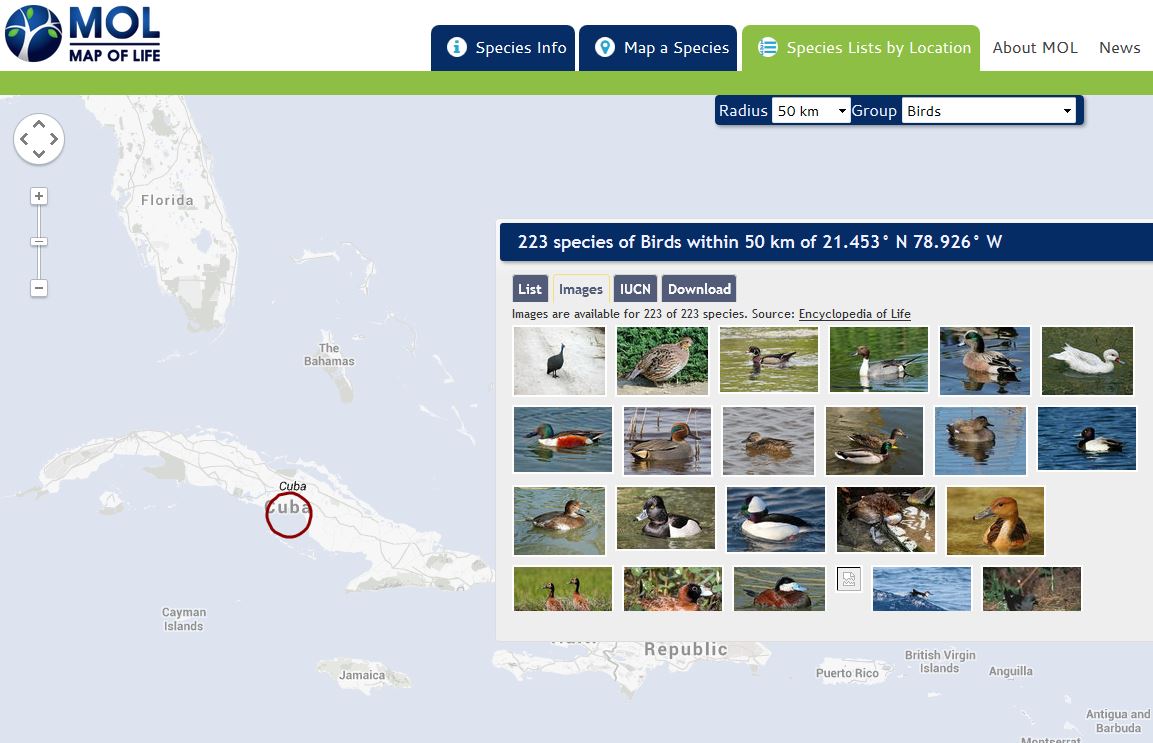 Ecology & Evolutionary Biology – Walter Jetz and his team are studying global biodiversity using a variety of geospatial and statistical tools.  Two of the major projects are the Global Bird Tree and the Map of Life.  Depicted here is a map showing images of some of the 223 bird species located within 50km of a spot in central Cuba.