The Global Surface UHI Explorer is an interactive web app to monitor urban heat island (UHI) intensities of practically all urban clusters on Earth. The app is built on the Google Earth Engine platform and allows users to query the UHI data of urban areas using a simple interface. The UHI dataset was created based on the simplified urban-extent (SUE) algorithm detailed in Chakraborty and Lee, 2019.

How to use the app

When you open the app, the map shows the annual mean daytime UHI layer at 1 km resolution derived from a combination of MODIS TERRA and AQUA Land Surface Temperature (LST) data for 2017. You can change the layer to display using the layer selector and change the year for which the UHI is displayed using the slider. You can search for a city or region of interest using the search bar at the top. 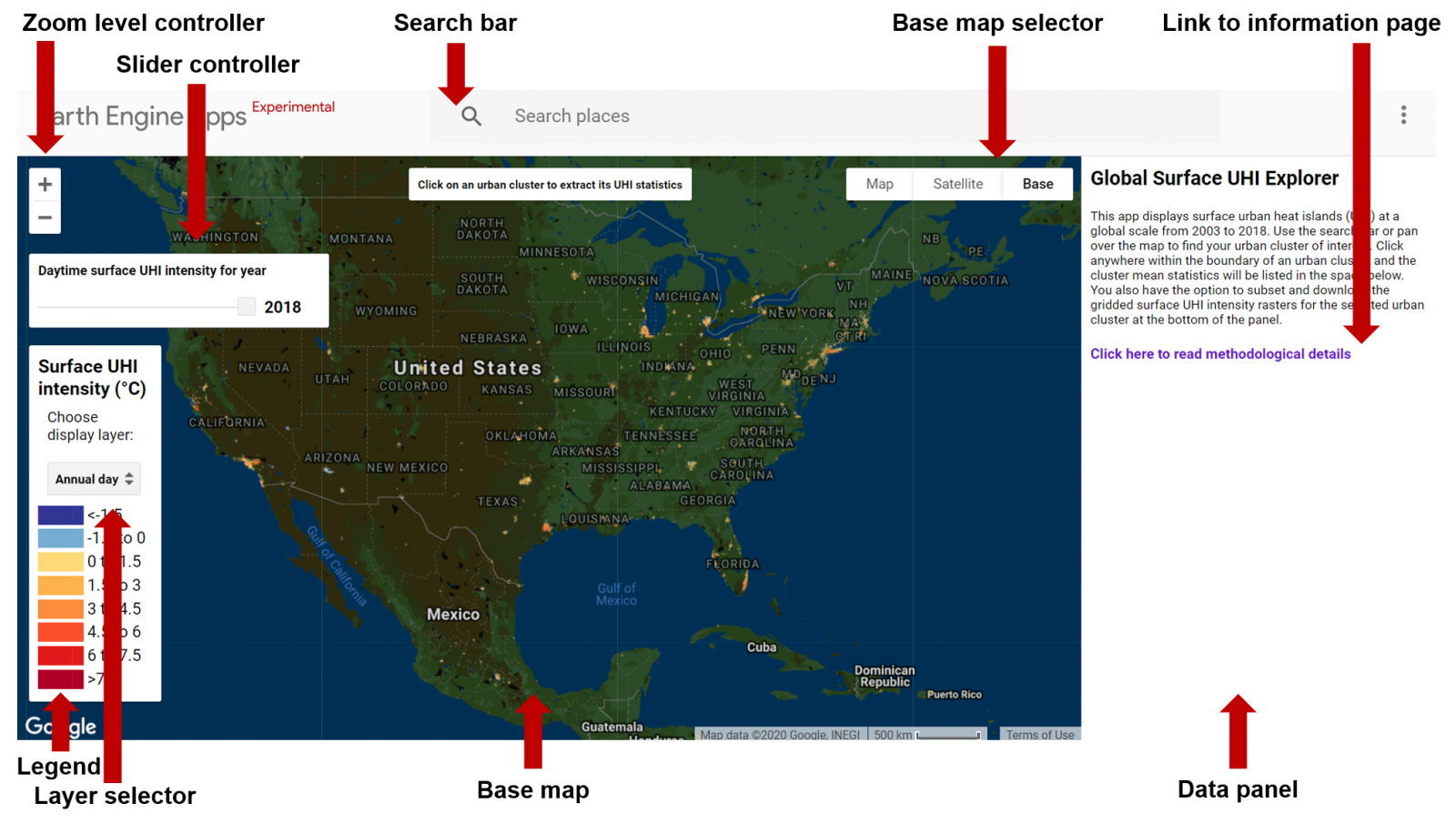 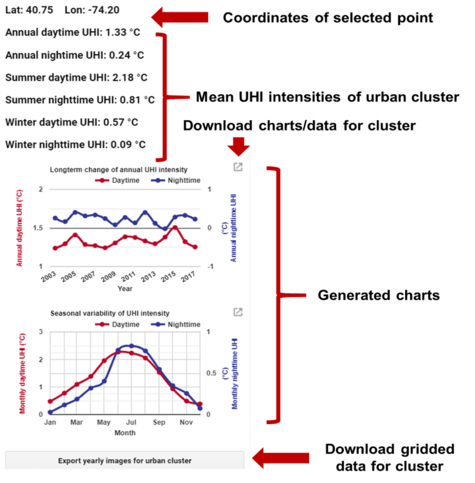 If you click on any of the urban areas, as represented by the colored parts of the layer, you will get the mean annual, summertime, and wintertime UHI intensities averaged over the whole cluster for both daytime and nighttime.

The app also generates two charts for the cluster clicked on: one displaying the change in the UHI intensity from 2003 to 2020, and another showing the monthly variation of the UHI intensity derived from 16 years of MODIS data. You can click on different clusters to extract the corresponding UHI values.

If you click on the top-right corner of the generated charts, you have the option to download the chart in png or svg format or the data in csv format.

The second version of the dataset represents a more realistic implementation of the SUE algorithm using more recent land use data and leads to a reduction in the mean UHI intensities (by roughly 20%) compared to the version developed in Chakraborty and Lee, 2018. Our methodology has been modified in several ways, namely:

This web app displays and queries the third version of the dataset, an update to the second version. The data are the same, but the app now allows the users to download the gridded UHI data for a selected urban cluster. Scroll down to the bottom of the right-hand panel to extract the datasets for your selection. The masked pixels have a fill value of -999. As also mentioned in the original paper, the SUE algorithm attempts to create a globally consistent UHI database by generalizing the selection of the rural reference. As such, caution should be taken when analyzing the UHI magnitude of individual clusters, especially at the pixel scale.

This web app now displays and queries the fourth version of the dataset. The methodology used to create this version remains the same as the third version, but the land cover data used for the years 2016 and 2017 are the recently released year-specific ESA CCI land cover layers for those years (the layer for 2015 was used for 2015, 2016, and 2017 in version 3). In addition, we add the calculated UHI intensity data for 2018 based on the ESA CCI land cover data for that year. The data from 2003 to 2018 are now used to calculate all the yearly, seasonal, and monthly composites.

The dataset has now been updated up to the year 2020 using the latest ESA CCI land cover product for the corresponding years.

Note that the UHI calculations by this app are done for urban clusters, not for individual cities. This is because there are a host of issues with delineating urban areas at the city-scale (see Chakraborty and Lee, 2019).

There are two kinds of missing data, either at the cluster-scale or at the pixel scale:

Finally, the Landscan urban extent dataset does not change over the years, and thus, cannot account for any change in the footprint of the UHI over the years.

Details of the SUE algorithm used to estimate the UHI intensities can be found in Chakraborty and Lee, 2019. If you have any questions or comments about the data, please contact tirthankar.chakraborty@pnnl.gov.  This work is licensed under a Creative Commons Attribution 4.0 International License.

If you want to cite this dataset, please use the following reference: